Congratulations and Thank you!
to Mike Finley of Tehachapi California for bidding highest on the Slash Autographed Guitar benefiting Guitars Not Guns 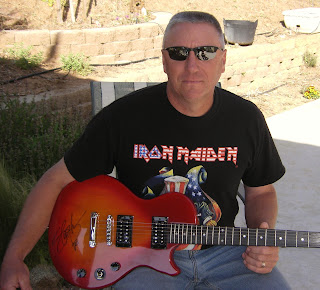 Thanks again for this opportunity. I have wanted a signed guitar for years, and just never found one I was willing to spend the money for. I will cherish this for years to come. The fact that it benefits a good cause makes it all the more special.  Mike Finley
Posted by Guitars Not Guns - Non Profit Music Program at 1:36 PM No comments:


Thanks for the guitars

On behalf of the San Luis Obispo County Probation Department, I would like to thank Deputy Sheriff Dale Anderson and the local chapter of Guitars Not Guns for their generous donation of six acoustic guitars to the County Juvenile Hall.
Since 1992, Guitars Not Guns has been providing guitars to minors at risk for delinquency all over the United States and Canada. The guitars will be used in the Juvenile Hall Guitar Program, a program in which Juvenile Hall staff members provide basic guitar lessons to detained minors. It is hoped that by providing a positive recreational outlet for minors, they will be less likely to reoffend and return to the Juvenile Hall.
I'd also like to thank Juvenile Services Officers Darby Lambrecht and Jeremy Griego, as well as Mental Health therapist Jim Pearce for their efforts in starting the Juvenile Hall Guitar Program.
Posted by NorCal MINIs at 12:27 PM No comments:

Sammy and the Wabos performed their annual Cabo Wabo Cinco De Mayo show at Harrahs South Shore Room in Lake Tahoe on May 6 - 7, 2011. This beautiful Yamaha acoustic electric guitar and a Strat pick guard were both signed by the Red Rocker prior to the May 7 show.

Thanks to Barbara Gorin --GNG's VP of Fundraising & PR--for her perseverance in connecting with Sammy's management for these autographs.  Of course, Thank you Sammy, Carter and Paul!  A special thank you to Robert Brown for donating this pristine Yamaha FG -411- CE guitar!
The autographed guitar and the autographed Strat pick guard are
to be auctioned seperately on Ebay in July - the date to be determined.
Check back on this blog soon. To be notified by email  click here.
I attended the Saturday night show and it was awesome.  Sammy, along with The Wabos - Mona, Vic, and David "Bro" - put on a great show and party! We were treated to a couple surprise performances too: Michael Anthony stepped in on bass for the first several songs - which included a few Van Halen, Montrose and Chickenfoot favorites. Sammy's son Aaron rocked the vocals on Rock Candy while Sammy worked the onstage crowd.  The slide show above is from the Saturday, May 7 show.

Ebay Auction Ends: May 1, 2011
Click Here for Link to Auction

Photo gallery link
Slash (Saul Hudson, born July 23, 1965) is a British American musician and songwriter. He is the former lead guitarist of the American hard rock band Guns N' Roses, with whom he performed and recorded from 1985 to 1996. He later formed Slash's Snakepit and co-founded Velvet Revolver with his former bandmates Duff McKagan and Matt Sorum, and his debut solo album, Slash, was released in April 2010. He has been on tour with touring vocalist Myles Kennedy to promote the album since its release. A second solo album is due in 2012. Slash has received critical recognition as a guitarist. In August 2009, Time Magazine ranked him #2 on its list of the "10 Best Electric Guitar Players of All-Time". He was also ranked #21 on Gigwise's list of the "50 Greatest Guitarists Ever". Slash is a playable character in the video game Guitar Hero III: Legends of Rock. Beating Slash in a one-on-one competition, unlocks him as a playable character. Beating him in this challenge leads to the player and Slash playing the master track of "Welcome to the Jungle" as an encore song. Source: http://en.wikipedia.org

Slash Fans and Rock Memorabilia Collectors -
Don't miss out on this piece of Rock and Roll History!
$99 Opening Bid and No Reserve!
Click Here for Link to Auction

Plus a MONO M80 hybrid case featuring the patented Headlock™ inside. Perfect for protecting the angled headstock of the Les Paul during backwards falls. The world needs music. Go Play.™.