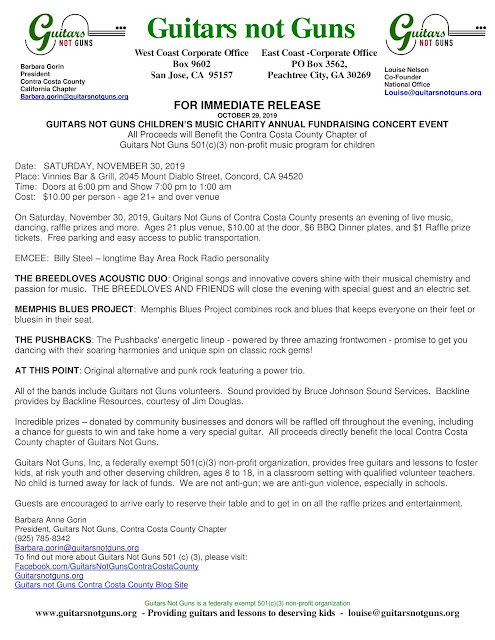 PRESIDENT BARBARA GORIN AND VP OF SPECIAL PROJECTS JAY KIRKLAND ON BAY AREA PEOPLE TALKING ABOUT GUITARS NOT GUNS - MARCH 17, 2015 - WE ARE BOTH INSTRUCTORS AND NEED VOLUNTEERS TO HELP! 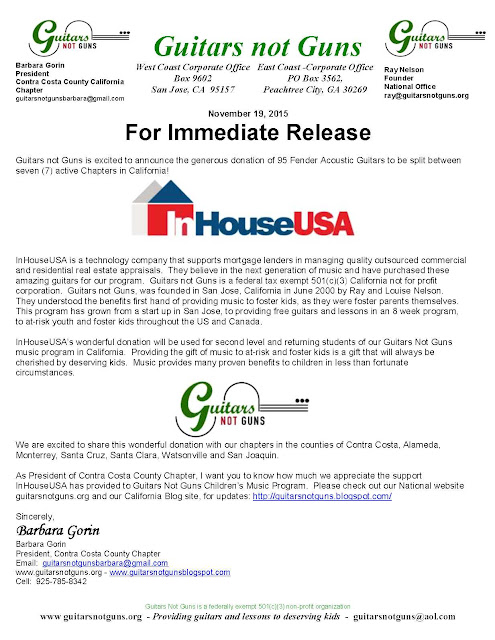 
Check out the latest Article in October 2011 issiue of Lafayette Today!

This article appears in the July/August edition of


Guitars Not Guns Program an Inspiration for Youth

Ray and Louise Nelson see the guitar as an instrument, not just for producing music, but for inciting social change. They are the founders of Guitars Not Guns, a California-based nonprofit aimed at improving the lives of struggling children through music.
This organization provides youth with one-on-one guitar lessons, once a week, over an eight-week period. Most of the children, who range in age from eight to 18, are part of the foster care system or are “at risk” based on environmental factors.

“All the kids come from families where there is domestic violence, drugs, incarceration, even murder, and these kids will come to every Guitars Not Guns session. That says something, not only about Guitars Not Guns, but about the kids. It’s working,” says Juli Rositas, an intervention services manager for STAND, an agency for families free of violence that frequently collaborates with Guitars Not Guns.
While inspiring children to pursue music is the focus, instilling a sense of responsibility in them is also at the core of the program. Students are taught each week by volunteers, who act both as guitar instructors and life mentors. By teaching these children to appreciate a possession and value a skill, Guitars Not Guns hopes to extend these lessons into the future for the children, says Director of Public Relations and Vice President of Fundraising Barbara Gorin.
“It’s about giving kids something positive to do instead of something destructive to do,” she says. “Instilling confidence, giving them encouragement, and something fun to do.”

Rositas recalls one instance when a grandmother stayed to listen to her grandson’s lesson, and by the end, was brought to tears, saying, “I have never seen my grandson in 11 years focus on anything. He’s completely transformed. The only time that kid has peace is when he’s playing that guitar.”
The program began as a result of the Nelsons’ own experiences with the foster care system. In 1992, they decided to become foster parents. Wanting to introduce the children to the joy of live music, Ray provided them with donated, used guitars. Thus, Guitars Not Guns was born. Though the organization began in California, chapters now exist throughout the US and Canada.
The organization prides itself in never turning away a child from participation. The students, or their guardians, may simply sign up. The organization is entirely nonprofit, so its operation is completely dependent on donations. Guitars Not Guns collects both electric and acoustic guitars, as well as accessories, like guitar picks and strings. Cash donations are also welcomed.
Guitars Not Guns also raises funds through celebrity endorsements. For example, Slash, former lead guitarist for Guns N’ Roses, autographed a Gibson Epiphone Les Paul that was auctioned on eBay, with the proceeds going directly to the organization. The group is currently auctioning an acoustic electric Yamaha autographed by Sammy Hagar. Through this type of support, Guitars Not Guns looks to a hopeful future.

Guitars Not Guns teaches youth to "rock it, not cock it"


Diablo Magazine Honors Barbara Gorin VP Fundraising and PR the Threads of Hope Award in 2009
for her Volunteer work with Guitars Not Guns:
Note from Barbara Gorin:


My passion for music and kids, and my volunteer work with Guitars Not Guns was recognized by Diablo Magazine, and I was honored with the Threads of Hope Award for 2009. There were many nominations of other volunteers in our community that all have wonderful important causes. My involvement and story is a little different. If you watch this video, you will see why, and it will bring a smile to your face. Thank you Diablo Magazine, and all of the wonderful sponsors and support. www.guitarsnotguns.org